With so much hype surrounding space exploration and the colonization of the Red Planet, we need to take a step back and think about the most basic needs of the first colonists. Can humans procreate on Mars, and would that even work? Is it possible to sustain our population, and will the environment support human pregnancies at all? Will our new space babies even resemble us, or will they be an entirely new species? Read on to find out!

In 2016, Elon Musk, aka the mastermind of SpaceX, claimed that we would colonize Mars in less than ten years. The organization’s Mars program aims to achieve full colonization of the planet. Musk claimed that the first Mars expedition crew would include a hundred people. Initially, the plan was to land by 2022. That was later postponed to 2026. Either way, the deadline is approaching quite quickly.

According to Musk, the goal of this initiative is to ensure our race’s survival. It’s a solution to prepare against the worst-case scenario that could make life impossible on Earth. That might include an asteroid strike, nuclear war, a climate apocalypse, etc.

However, Musk’s company doesn’t actually intend to build and sustain a base on the Red Planet. It’s essentially a transport company that will fly humans to Mars and back. That is, someone else will be in charge of developing and sustaining a Mars base. Musk has developed the vision for sustaining life on Mars. However, in the long-term, the idea is so intricate that it extends beyond the capabilities of his company. Building a major colony requires a complex adaptive system, lots of time, and the feat faces many uncertainties.

Nevertheless, the first mission will include building a small settlement to provide an outpost and allow it to become self-sustaining. Musk believes that the initial colony could grow up to one million people. However, since Mars is so different compared to Earth, this would require an incredible effort. For one, we would need to recreate our whole industrial base on the Red Planet but in an entirely different environment. Still, Musk is confident that we could build a city on the planet by 2050.

Can We Procreate on Mars? 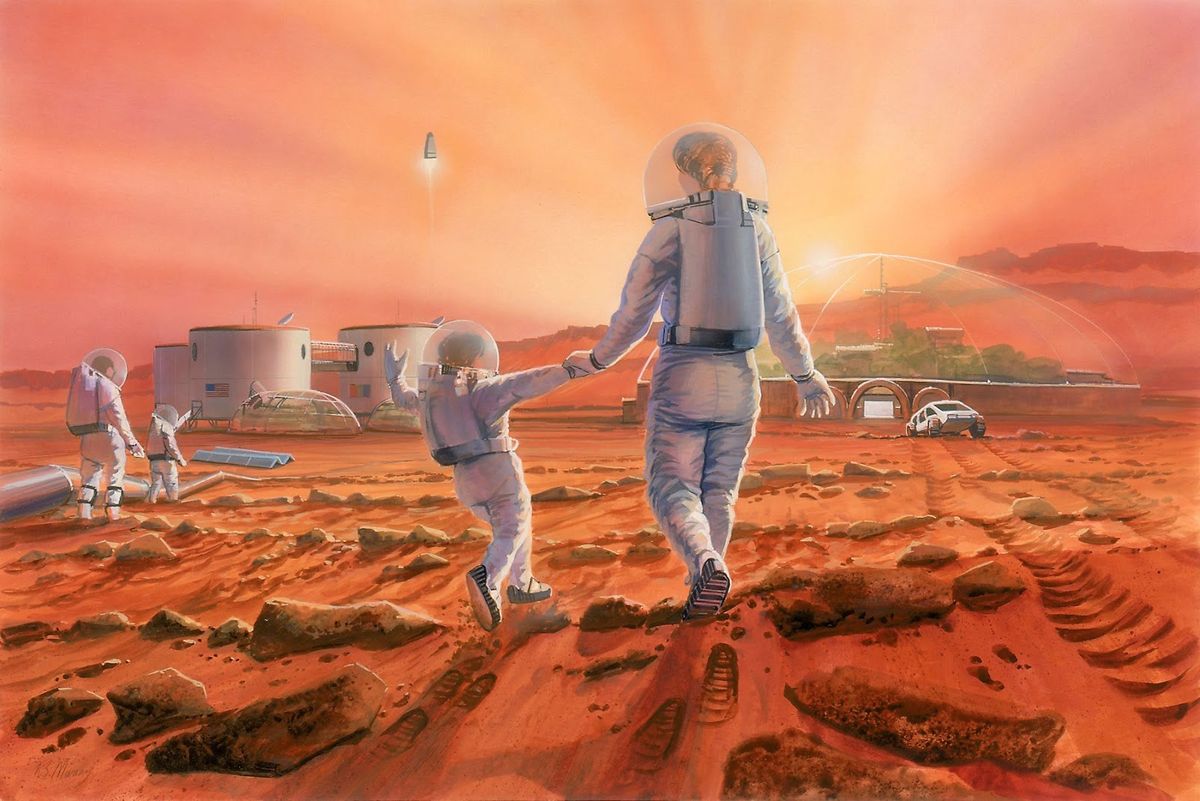 Of course, science can’t prove or fully explain what could happen to a pregnant homo sapiens on Mars. Nevertheless, human reproduction will be crucial to our survival if we establish a colony on the planet. Unfortunately, sex and procreation in space bear various social, biological, medical, and even ethical challenges.

Ultimately, that could make sex extremely difficult. For one, living on Mars interferes with our blood pressure and therefore makes the human body incapable of having sex. Also, some speculate that the difference in gravity could produce harmful ectopic pregnancies. Plus, it’s not known how the radiation could impact conception.

On Mars, the atmosphere doesn’t stop the radiation from reaching the surface. We still haven’t developed effective radiation-shielding tech that could conceal us from it. Scientists speculate that the radiation could disrupt the male sperm count and our reproductive cells.

To take cues from science-fiction, we could end up with alien space babies born out of mutated human embryos. Some experts claim that our Mars babies could even be considered an entirely new species.

Obviously, there are many more challenges to pregnancies on Mars. It could take decades for us to build only a basic infrastructure on the planet. How would we maintain a space-based pregnancy in the harsh conditions that we’ve described above? Clearly, we can’t expect to see advanced hospital facilities on the planet’s surface any time soon. Would we monitor our pregnancies on special ships, and how would that work? What about sex? Will there be special sex chambers on ships or structures that will give us enough privacy? Or will a team of astronaut doctors watch and record our mating rituals?

It’s quite possible that the first colony will live in primitive surroundings. At first, there may not be enough technology to support life as we know it. This initial period could be incredibly difficult for the first colonies. As mentioned, we can’t prove the effects of Mars’ radiation and reduced gravity on our bodies and potential pregnancies. Thus, it’s likely that the first colony will focus on a long and extensive testing phase. Some scientists also speculate that our babies would have to be genetically engineered. Sadly, the list of challenges goes on, and science can’t solve all of them.

So how soon can we actually get there, and which scenario makes the most sense? The first part of our timeline is set between 2010 and 2019. That was the beginning of the Mars hype. After that, it’s likely that there will be various launches and tests within each two-year window. The reason for this is that the launch window for moving to Mars is perfectly aligned every two years. According to Musk, he plans to launch Starship, a space ferry that will carry 100 people in the next few years.

However, the journey to Mars doesn’t solely depend on SpaceX. We can expect an exciting space race in the 2030s. Many other countries, such as China, the Emirates, India, Japan, are all planning to send ships and people to Mars.

Some estimates say that we will build the first base, aka Mars Base Alpha, by 2030. The population could be around 170. In this decade, we could also work towards creating sustainable resources like fish farms and extracting water from the soil. Also, radiation filtering and structures like gardens will be essential for sustainability. We could expect the first baby to be born by the 2040s. Moreover, in this decade, Mars will get more colonizers and wealthy space travelers. By the decade’s end, Mars Base Alpha could have a population of around 3,000.

It’s estimated that there will be more colonies and more bases by the 2050s. What’s more, the planet will have a sustainable infrastructure along with industrial capabilities, resources, and even a police force. From there, it will be a long journey until Mars becomes independent. Estimates claim that this could happen in the 22nd century and that life on the planet will be fully self-sufficient, with a population of over 30 million.

As you’ve seen, we still have a long way to go before we fully colonize the Red Planet. However, with so many uncertainties, it remains to be seen whether we’ll be able to procreate on Mars and sustain life. One thing is certain: we are truly living in the future!